Schmalz has received two awards for its innovative strength: The F.A.Z.-Institut, Frankfurt, awarded the company the certificate "Germany's innovation leader". In a study conducted by the English business platform Corporate LiveWire, the German company received the seal "Specialist of the Year" in the vacuum automation category. 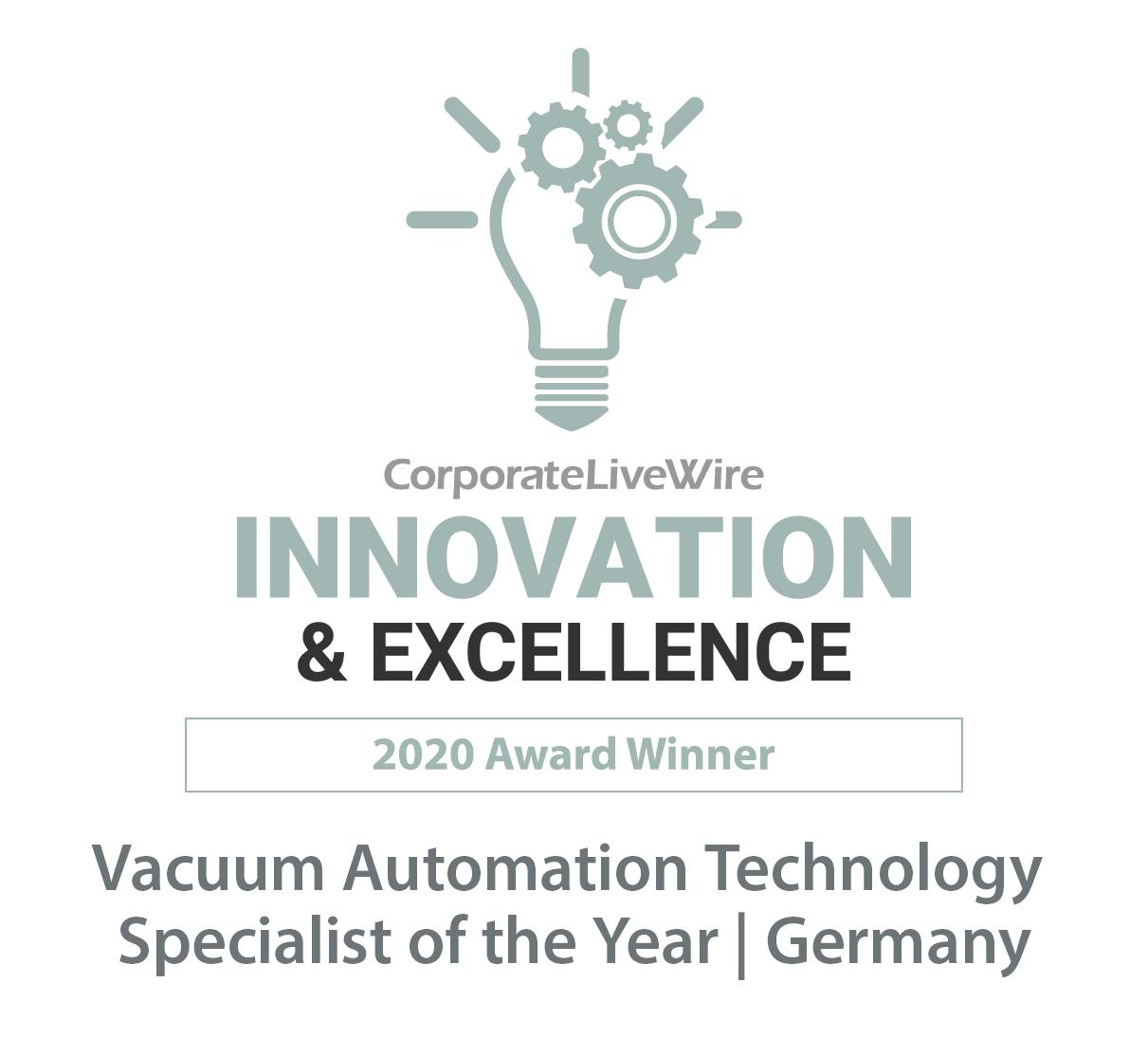 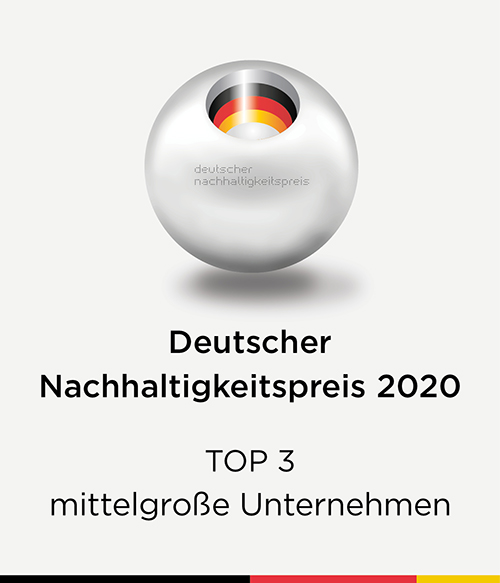 Grand Prix of the middle class

J. Schmalz GmbH was one of only six companies from Baden-Württemberg to receive the award as a finalist in the "Großer Preis des Mittelstandes" - more than 5,000 companies were nominated throughout Germany. The organisers had announced the motto "Sustainable Business" for 2019. Companies cannot apply for the award, they must be nominated. 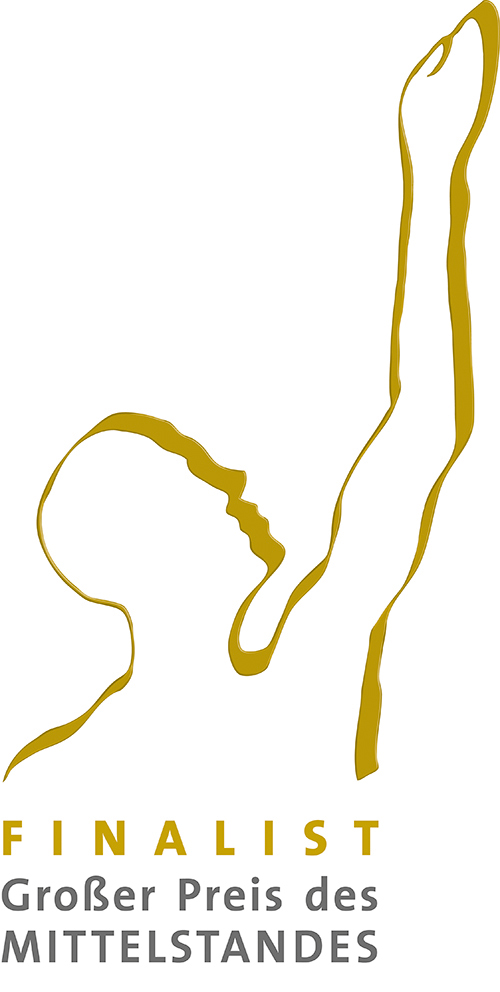 Schmalz has been named one of the best employers in Germany in the renowned competition "Germany's Best Employers 2018" by the Cologne-based Great Place to Work® Institute. After 2004, 2009, 2012 and 2015, this is the fifth time that Schmalz has received this award. In the ranking, Schmalz occupies an outstanding 19th place in the category "Companies with 501 to 2,000 employees". In total, about 750 companies from all industries, sizes and regions took part in the current benchmark study on the quality and attractiveness of workplace culture and underwent independent testing by the Great Place to Work® Institute. 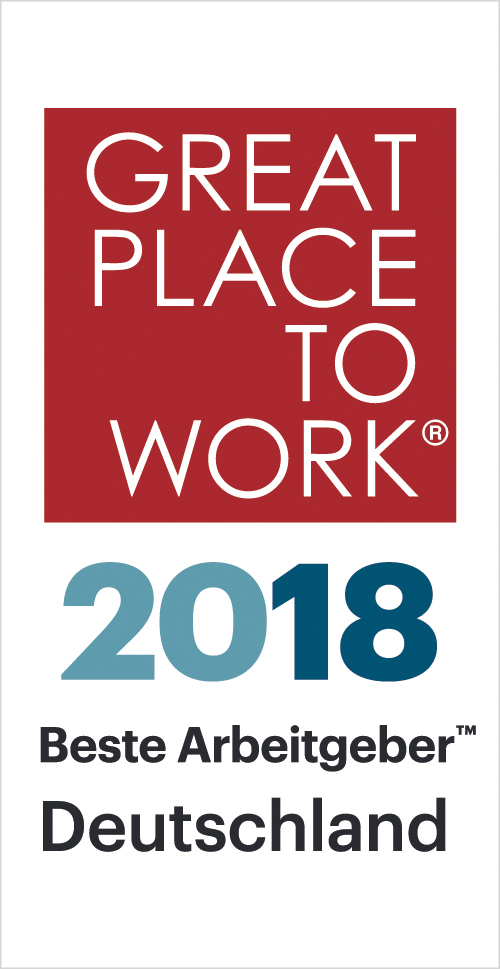 100 locations for industry 4.0 in Baden-Württemberg

The Alliance Industry 4.0, a network initiated by the Ministry of Economic Affairs of Baden-Württemberg, has awarded the distinction "100 Places for Industry 4.0 in Baden-Württemberg". The award was given for the control and service app "Schmalz ControlRoom", with which vacuum components can be controlled quickly and easily via smartphone. 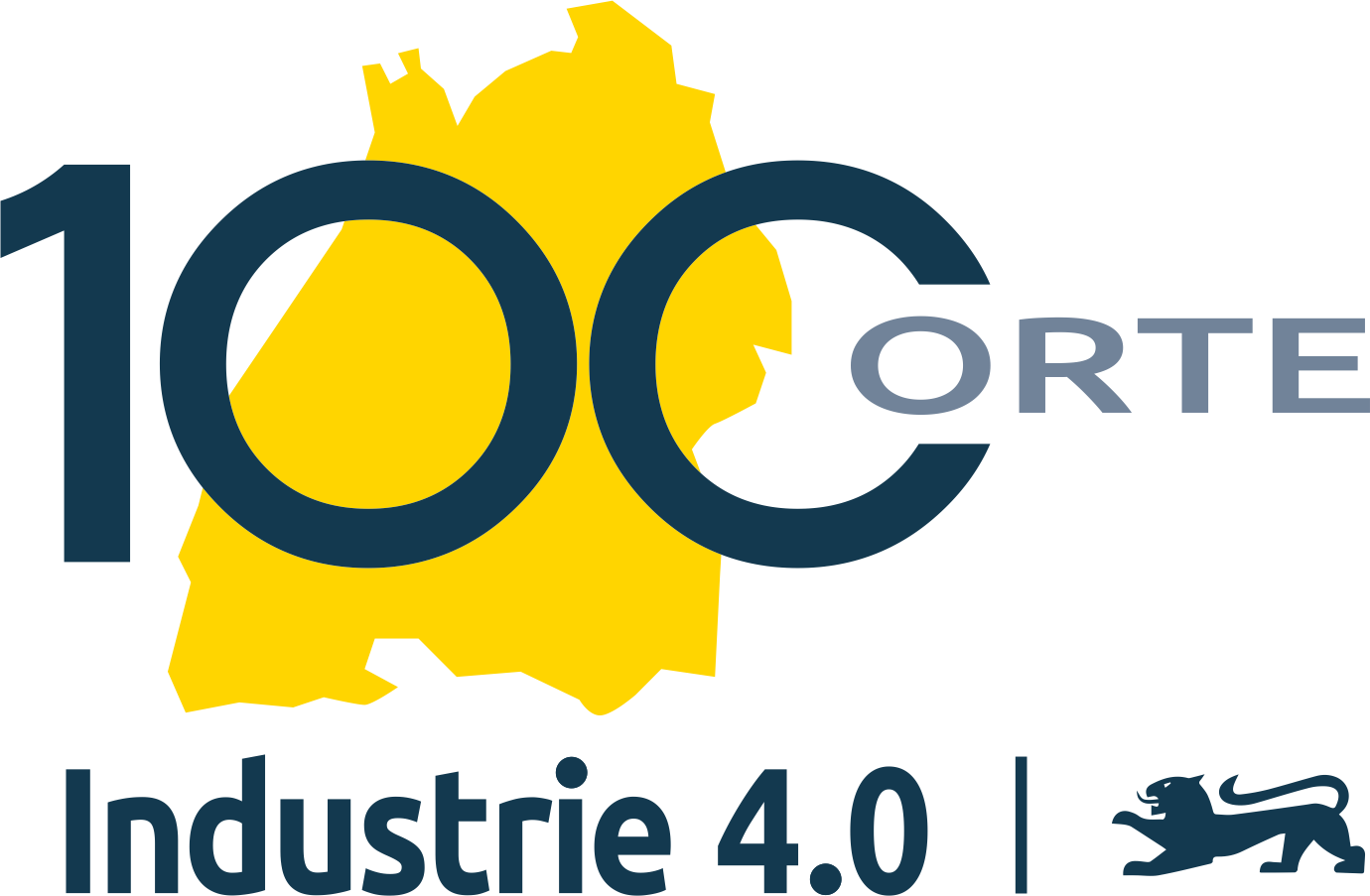 Schmalz received the award for its particularly successful study concept in the category "Dual Partner from the study area of economics with up to 5,000 employees". The prize of the Baden-Württemberg Cooperative State University was awarded for the first time in 2017. 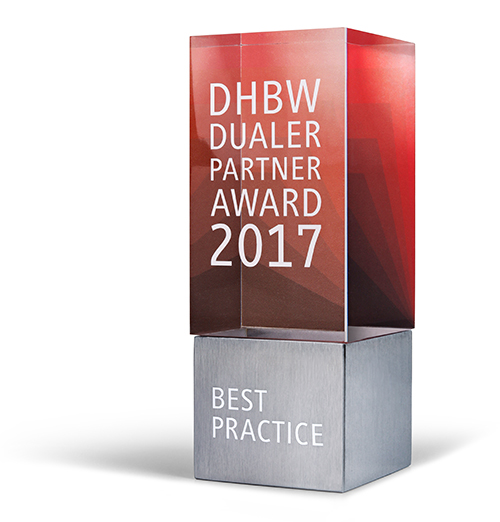 Logistics experts from VW and the Institute for Production Management (IPM) selected Schmalz from around 180 participants as one of the 20 best innovators. In doing so, the automotive group honoured the vacuum specialist's future-oriented projects in manual handling.

The world market leader in vacuum technology was awarded the "Best Innovation System" at the renowned "German Industry Innovation Award". The award honors outstanding innovations and innovative organizational structures that ensure the long-term competitiveness of German industry on the international market. The underlying processes, the culture of innovation lived in the company and the working environment at Schmalz convinced the jury headed by Prof. Thomas Bauernhansl. "The Schmalz company has developed an innovation system which develops innovations 'on the assembly line' in an exemplary manner. From the innovation strategy and the innovation process to innovation controlling and the broad integration of market, customer and trends, Schmalz works in a highly professional manner and, at the same time, with a great sense of responsibility for employees and the environment," said the jury in its statement. The prize was initiated by the trade magazine "Produktion".

Schmalz has been named one of the best employers in Germany in the renowned competition "Germany's Best Employers 2015" by the Great Place to Work® Institute. After 2004, 2009 and 2012, this is the fourth time that Schmalz has received this award. In the ranking, Schmalz took an outstanding 13th place in the category "Companies with 501 to 2,000 employees". A total of around 600 companies from all industries, sizes and regions took part in the current benchmark study on the quality and attractiveness of workplace culture and underwent independent testing by the Great Place to Work® Institute. The renowned competition took place for the 13th time.

In March 2015, J. Schmalz GmbH was awarded the Baden-Württemberg Safety Prize. The prize is awarded in recognition of outstanding projects in the field of operational safety. With the introduction of a security management system (ISMS), the company protects itself against unauthorised access to its know-how, also in an international environment. The prize was awarded by the Ministry of the Interior of Baden-Württemberg.

For the second time since 2010, J. Schmalz GmbH has received the coveted Axia Award for sustainable corporate management. "Think sustainably, manage successfully" - this was the motto of the competition for medium-sized companies from Baden-Württemberg, which was announced by the auditing and consulting company Deloitte. The focus was on the sustainable safeguarding of employees and shareholder structure, financing and brand image.

For the first time, the European Union implemented the GBE (Green-Blue-Energy) joint project, in which Italy, Germany, Austria, Slovakia and Bulgaria participated. This European project awards prizes for the use of renewable energy sources and exemplary processes and concepts for the combined use of energy in companies. 13 companies in Germany received a plaque for their commitment, including J. Schmalz GmbH. In addition, Schmalz was the only company in Germany to be selected for the DEMO GBE Factory and is therefore considered a role model for commitment to the conservation of resources in relation to renewable energy.

The trainees of J. Schmalz GmbH were honoured for their successful discovery of energy-saving potential in the company. The "Climate Workshop 2.0" is a competition which introduces young trainees and students to the topic of sustainability and environmental protection and would like to inspire them to do so. The trainees of the Schmalz company dealt with the heat loss at the truck loading ramps in the goods receiving area of the production hall.

J. Schmalz GmbH was awarded for the third time in the benchmark competition "Germany's best employers". The Great Place to Work® Institute Deutschland compiled the ranking "Germany's Best Employers 2012", with Schmalz occupying an outstanding place among the top 50 in the category "Companies with 50 to 500 employees". In the overall field of participants, and thus measured against well-known "large companies with more than 5,000 employees" and companies with "501 to 5,000 employees", the vacuum technology specialist was able to achieve an excellent position among the top 100.

The vacuum technology specialist J. Schmalz GmbH has received the first prize for the "Best Assembly Idea 2011". The award was presented at the 23rd German Assembly Congress in Munich by the iwb (Institute for Machine Tools and Management Sciences) at the Technical University of Munich. The iwb awarded the prize to the "Pick-by-Shutter" assembly workstation developed by Schmalz, where vacuum generators are assembled from individual parts. The workplace is equipped with small gates which open or close automatically depending on the product variant. This principle prevents incorrect component removal and reduces search times to a minimum.

The Volksbanken Raiffeisenbanken in Baden-Württemberg award the "VR Innovation Prize" to medium-sized companies. Schmalz receives the main prize for the development of a new gripper for the photovoltaic industry, the so-called Schmalz Wafer Gripper (SWG). It enables cycle times of less than one second, handles the solar cells carefully and without leaving a "fingerprint" and can be used in production under clean room conditions. This is the only way to make production sustainable and economical.

For three years now, the consulting and auditing company Deloitte has been awarding prizes to medium-sized companies for their sustainable, successful business activities. The coveted Axia Award is presented. The ancient Greek term Axia stands for "value", "ability" and "success" and thus connects central aspects of the work and challenges of medium-sized companies.

The initiative "Fit for the Knowledge Competition" has awarded J. Schmalz GmbH the prize for exemplary knowledge management in medium-sized companies. The prize was presented by Georg Bröhl, Ministerial Director of the Federal Ministry of Economics and Technology in Berlin. The aim of the competition is to transfer the methods and tools of knowledge management to small and medium-sized companies on a long-term basis by means of concrete examples.

365 places in the land of ideas

J. Schmalz GmbH received the award "Selected Landmark 2009" for its ecological nature trail. This award is presented once a year by the initiative "Germany - Land of Ideas". An independent jury selected the ecological nature trail from more than 2,000 applications. Individuals and groups can register with Schmalz for a free guided tour and are informed about the topics of environmental protection, regenerative energies and energy-saving measures by means of concrete examples. Schmalz would like to use the ecological nature trail to provide information about innovative concepts for environmentally friendly actions.

The Great Place to Work® Institute Germany compiled the ranking "Germany's Best Employers 2009". In this ranking, J. Schmalz GmbH, with 451 employees throughout Germany, occupies an outstanding place among the top 50 in the category "Companies with 50 to 500 employees". In the overall field of participants, and thus measured against well-known "large companies with more than 5,000 employees" and companies with "501 to 5,000 employees", the Glatten-based company achieved a remarkable position among the top 100. With this result, Schmalz achieved an above-average position in the competition for the second time since 2004.

One of the declared goals of J. Schmalz GmbH is to consistently use all locally available regenerative energy sources. In 2007, Schmalz succeeded for the first time in generating more energy from environmentally friendly sources than the company consumes. With the award of the European Solar Prize 2007 in the category "Owners or operators of systems for the use of renewable energy sources", the successful path to becoming a "positive energy company" was recognised.

With its innovative and compact vacuum generator "X-Pump", J. Schmalz GmbH participated in the competition Innovation Prize of the State of Baden-Württemberg "Dr. Rudolf Eberle Prize 2006". Schmalz made it to the final round and once again demonstrated its outstanding innovative strength. The vacuum generator X-Pump is an integrated ejector system with all relevant suction, blow-off and switching functions, which results in significant savings of expensive compressed air at the highest suction power.

With this award, the jury headed by Dr. Volker Hauff, Chairman of the Council for Sustainable Development, honoured Schmalz's exemplary social and enormous ecological commitment. On the other hand, the members of the jury expressly emphasise that it has been impressively demonstrated that systematic management in the sense of ecologically and socially responsible economic activity is not only very possible, but also leads to business success.

The vacuum technology specialist convinced the jury in all areas and was awarded the "German Prize for Business Ethics 2005".

Eco Manager of the Year

Dr. Kurt Schmalz and Wolfgang Schmalz were awarded the "Ökomanager 2004" prize. The magazine CAPITAL and the environmental foundation WWF Germany were the awarding authorities and initiators. The "Ökomanager" prize is the highest national award for efforts in corporate environmental protection. It is not possible to apply for this prize, but is suggested for it. In this case, the BDI (Federation of German Industries) nominated Dr. Kurt Schmalz and Wolfgang Schmalz.

By winning the environmental prize "Ökomanager 2004" by J. Schmalz GmbH, an environmental protection initiative which is exemplary at all levels and which can hardly be found anywhere else in Germany's small and medium-sized enterprises is honoured.

The Great Place to Work® competition is the largest and most important national and international competition for investigating the quality and attractiveness of employers. The companies and their management are evaluated on the basis of employee surveys on the topics of credibility, respect, fairness, pride and team orientation as well as a supplementary personnel culture audit with personnel managers. Due to the excellent results of the competition organized by the business magazine Capital, Schmalz qualified for the contest of the 100 best employers in Europe, which was organized by the "Great Place to Work Institute Europe".

Among almost 1,000 applicants, Schmalz achieved a place among the top 100 best companies in Europe! (The organisation did not publish more detailed placement information).

Schmalz has received two awards for its commitment to environmental protection. In Germany with the BDI Environmental Award (Federation of German Industries) and throughout Europe with the Green Week Award.

In recognition of its exemplary achievements in the field of environmental protection, Schmalz receives the Environmental Award for Companies of the State of Baden-Württemberg in the industrial sector. The prize is awarded to companies which contribute in an exemplary manner to the protection and preservation of our environment.